Imagination Theater’s ensemble is an incredibly dedicated group of actors, facilitators, and teaching artists with huge hearts and tremendous talent.  It takes stelar individuals to make a beyond stellar ensemble!

Every year, our ensemble members vote to name one of their peers the ensemble member of the year.  Here are the credentials we ask everyone to consider when casting their vote:

“This person has gone above and beyond the call of duty throughout the season, and is well-rounded in all areas of IT’s programming as an actor, moderator, improviser, facilitator, educator, and writer.  The ensemble member of the year has a positive attitude both on stage and off, and is looked upon as a leader within the company.  This person shows remarkable commitment to IT, having volunteered his/her time on numerous occasions, and is consistently reliable and professional.  The ensemble member of the year truly understands IT’s mission, and strives to incorporate “IT skills” into his/her life.”

The votes are in and the winner is… Dimokratia Michalopoulos (for the second time)! 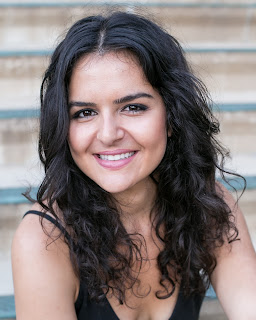 Here’s a sampling of what Dimokratia’s fellow ensemble members had to say about her:

“She has a warm sense of humor during shows and on car rides.”

“She has a great balance of focus while still having fun and being supportive and engaging."

“I've never heard anything but positivity from her about what we do when we're doing it.”

Dimokratia started with Imagination Theater as an actor and she still continues in that role after taking on facilitation responsibilities as well.  This season she trained to facilitate our Children’s Sexual Abuse Prevention Program, No Secrets.  By taking on the title of No Secrets facilitator, she has been instrumental in allowing that program to extend beyond the city limits in accordance with Erin’s Law.

I have been fortunate enough to watch her facilitate and act in a number of shows this past season.  Regardless what role she’s playing, her commitment to our social issues mission is a gift to our audiences.  Younger audiences gravitate to her warm energy and overflowing positivity.  Older audiences easily relate to her and feel comfortable asking her questions or accepting her invitations to join the actors on stage.

In addition to our social issues shows, Dimokratia volunteered at our annual benefit and participated in the pilot program for a corporate workshop on the east coast.  I was fortunate enough to tour with her for that corporate workshop and witness the way she carries her onstage positivity into every aspect of touring from navigating airports to finding a good meal in a new city.

She’s an omnipresent force within our company, and it’s a privilege to celebrate her this year (yet again) as your Ensemble Member of The Year!

Congratulations Demi, and thank you for everything you do!

As always, you can learn more about Imagination Theater’s ensemble and programming at www.imaginationtheater.org.

Posted by Imaginationthtr at 6:12 AM No comments:

It was really fantastic to witness new takes on familiar characters and to see fresh blood in some of our most popular scenes.  Every group of auditioning actors evoked both laughter and conversation from their peers.

We are so grateful to be a part of such a phenomenally talented theater community!

In the next couple of weeks we’ll be introducing the newest members of the Imagination Theater ensemble!

We’re looking forward to a fantastic ensemble and another great season of social issues theater!

As always, you can learn more about Imagination Theater at www.imaginationtheater.org.

Posted by Imaginationthtr at 1:06 PM No comments: