When you practice participatory theater, there is no greater joy than an enthusiastic audience of “spect-actors.”

This afternoon we experienced the thrill of performing Show Some Respect in front of an incredibly brave and open group of high school students. 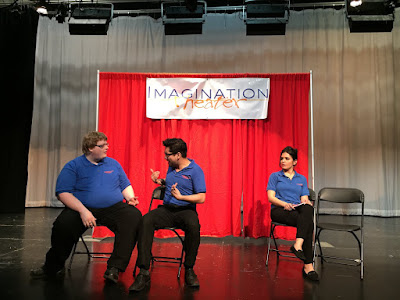 During a discussion about slurs, one student was honest enough to admit that he “uses those words every day." After that confession, he listened — genuinely listened — while his peers opened up about how those words make them feel.  Together, the audience distinguished between a label and a slur, and committed to standing up against future use of slurs in their school community.  Students from different backgrounds made themselves vulnerable, and then learned though experience, how an honest exchange can promote understanding and positive change.

Following a later scene about a particularly hurtful prank, another student announced that this situation actually played out at his old school, causing long-lasting humiliation and pain for the girl who was the victim of the prank.  He was eager to take the stage to demonstrate how such a joke can be shut down before it ever hurts another person.

It was beautiful to watch such meaningful conversations emerge from the scenes.  Each time a student volunteer left the stage, they were welcomed back into the audience with unsolicited applause.  After the show, multiple students thanked us for the play's message. While we certainly appreciate their gratitude, the message was already in the room.  Our performance simply created a space for these students to share it with one another.

Posted by Imaginationthtr at 3:21 PM No comments: